Had such an amazing weekend!! Most of all it was great to spend time with my great friend Christofer “Wasse” Wassenius! We were in Vegas two years ago so we did not had to stress around to see things! Before I didnt really enjoy going back to the same place twice but after Hawaii and Las Vegas I must admit that I change my mind, or maybe it is just the fact that Hawaii and Las Vegas is two of the most awesome places in the world. Anyway we mostly spend time at the pool, eating, walking around on the strip and went clubs :) Two times at Tao, then Surrender and JET. I like Surrender best, it a outdoor party around a big pool, which make the atmosphere exactly as you would expect from a good club in Vegas. There were 5 girls from Wasses university and 1 friend of them so most of the time we did not have to stand in a line at all. Me and Wasse had to pay cover fees while the girls went in for free! I think in some aspects Las Vegas is more of a paradise for girls than for guys, because they are really threated like princesses :)

On the way home the plane for late for more than one hours because of thunderstorms, the plane was also overbooked so i was offered $300 to stay one night extra in Vegas. Too bad I had class the day after, probably wouldnt be so fun to stay in Vegas alone anyways… At the SAC-airport a classmate named Cammi came to pick me up, thank you very very much Cammi!

Me and Wasse also planned a bit of our Mexico-trip in the middle of December. Or we actually decided to not plan so much, we will be traveling in the south of Mexico for around 2 weeks and then celebrate new years at Playa de Carmen. So much looking forward for that! Nice weather, cheap food, great company! It will be a perfect end of a great semester abroad!

Jonas we missed you :) 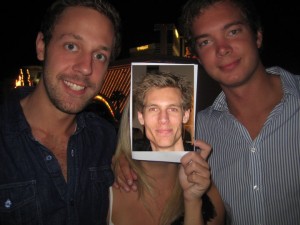