I must first tell what happened to me today! I went to Jack In The Box (like mcdonalds but cheaper) to buy a hamburger before classes. I handle the guy at the cashier my creditcard but it didnt work(what?), first i thought it was broken but then i remember that it could be that i didnt have enought money on the card and i didnt had any cash on me… we tried a couple of times and also to write the nummer on  card into the computer but it didnt work… Then the guy in the cashier took his card and paid for MY hamburger! So nice! Almost one hour payment he give away! Of course i went back later to pay him back, he refused and said it was a merry christmas present but after 3-4 tries i finally took my money! Such a hero! Thanks Marc at Jack and the box, you made my day!

Movie of the week I got posted on facebook from Wasse, thanks! :) Very fun! Hope Obama wins big time, i have finally bought a obama t-shirt, will wear it the 4 of November when the American election is!

We woke up at 9am on saturday, after breakfast and some planning we first went to Captain Cook Monument, i think the only possibility to get there is from the water, we rented cajaks to go monument. But the way there the most incredible cool amazing thing happened :) More than 20 dolphines showed up next to our cajaks, omg! ^^ We looked at them jumping and playing in the water, then me and another guy jumped in to the water with our snorkel equipment and there we were, dolphines next to us and under us, we couldnt touch them but we got maybe 1-2meter from them, yeah! Shitty that no one of us has a underwater camera so we couldnt make any pictures of it but it will always be our my memories :) 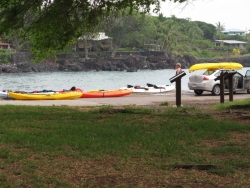 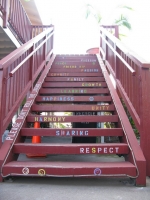 At the captain cook monument there were also an amazing snorkling spot with beautiful fishes, probabely the best snorkling i have been to, the coral was living and all kind of colorful fishes…

We stayed at the monument for a long time so the only thing we had time to do before it got dark was to visit the black sand beach, it was cool and of course i had to take a swim there(even if it was cold), the sand is similiar to normal sand but sandcorn is a bit sharper, when i sat on my knees it was hurting :) 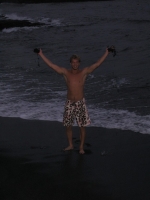 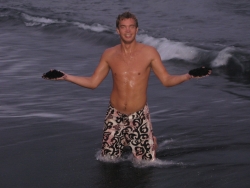 This weekend we were at Big Island! It was an amazing trip! Just 3 days but anyway i think i am going to write about in 3 parts. I skipped my first class in hawaii this friday!(very proud about that:) because we went by plane at 05:20 in the morning. We had to leave home at 03:00 so I just got 1 hour sleep… :S

Of course i slept the whole 45min flight, then we got our minibus, we were 6people in our car. Then we went to see a vulcano garden, the garden was nothing special but on the way there we went trough a jungle and could swing in the liana, that was cool! Then we went to the vulcano national park which was fu, we had a crazy guide :) He talked about some survivor programs he has been in on discovery channel and how bullshit they are, they actually slept in a hotel every night and could get food whenever they liked so remember, dont believe in what you see on TV. 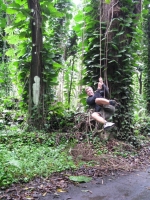 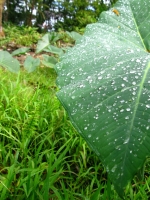 After the vulcano national park we went to a place were it was kilometers of lava stones/rocks, it was beautiful, i never thought the stones would be so sharp, almost like glass. 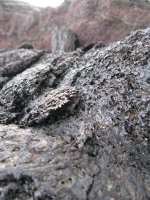 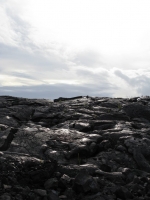 Then in the afternoon/evening we went to see the active vulcano, we couldnt get really close but we saw the red lava and everything and is was beautiful, like a firework that never ends but more calm, relaxing and majestic! Look the pictures and the movie! 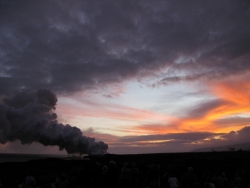 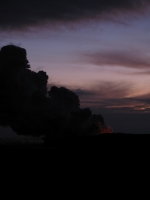 see also this movie of the crazy american mouse!

When we then went home in the middle of the night we stopped out in the nowhere to pee. When I looked up in the sky it was stunningly clear! I later learned that the sky here is the clearest in the world so a lot of people go here to watch the stars and do research about it. Anyway it was the most beautiful sky I ever seen!

We finally arrive at our hostel just as they were suppose to close the office at 10pm. After a short stop at mc donalds we all fall a sleep very quick after a long day… to be countinued!

Hehe! This movie have made me laugh many times! Thanks Adam! This is a recut version of Pretty much everywhere, it’s gonna be hot. Going to Big Island to see vulcanos in 3hours, need to pack my bag now! Will hopefully upload some nice pictures on monday or tuesday! Have a nice weekend everyone!

The time goes really fast, just 3months left… It has been a wonderful time so far with a lot of new impressions, experiences, meetings with new people and cultures. I like it a lot!

Yesterday we went to a houseparty with some Hawaiians and Americans, it was nice, the age-limit is 21 for bars and clubs so that why it is more houseparty here than in Sweden i guess! Tonight we are going to a hula hula party in a friend apartment:) Going to be interesting, will have to go and buy some sexy hola hola clothes later! :P

I also booked a flight to Big Island, which is the island with vulcanos so we are going there on friday morning and till stay until sunday evening. Will go there with some Germans from my communication and culture class, think it is going to be cool! Really looking forward for my first travel to an other island here!

Now it is time to eat, then go surfing! Aloha!

This friday I post a nice math trick which proves that 2=1. Of course it is not possible that 2=1, so can you tell me what is wrong in his way of proving 2=1?

The first five guys to solve it, will get a hand written post card from hawaii! :) good luck!

This weekend started with the first friday of the month party in downtown. It was great! The bar is outside and it was raining a little bit. But it is just good that it rains a bit since the rain is not heavy and it is so warm so it is just refreshing with some waterdrops.

On saturday we had a full day on the beach, playing beachvolleyball, soccer and throw some frisbee. Great day! Actually one of the first days which I just relaxing on the beach… nice!

Yesterday(sunday) we went for hiking, to hike up for the highest mountain on oahu! I think the trip took around 5hours up and down. Today my legs are a bit sore but i feel supriseingly fresch today! :) The view from the mountain was amazing! really beautiful to be walking on the trail and then see the scyscrapers in Honolulu, the diamond head. On the top of the mountain we had a beautiful view 360degree and could see most of oahu island. Look the pictures and video! In total I have uploaded 19pictures from the hike: 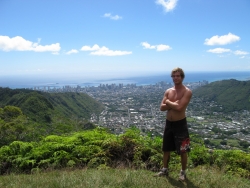 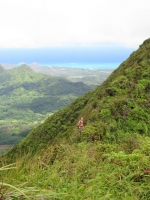 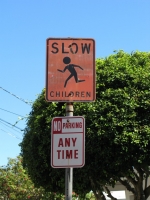 This is a love song inspired by the famous “2 Girls 1 Cup” video. For those who havnt seen the “real” 2 Girls 1 Cup video I strongly recommend to not see it. But most likely you all have heard about it… listen to the lyrics it is quite fun :P

This week is probably one of the toughest school week in my life… I went here to meet people, have a nice time and enjoy life :) And what happens…

The quizzes and homework matter because you get grades on them… But anyway I dont complain as much as I would have been doing at home, I am enjoying life, yeah! :) Now it is time to go to school to study for the last exam then I am going to have a wonderful weekend :) On friday it is “first friday of the month” which is a big event here!